The main problem. Attempting to install XP Professional will Blue Screen (BSOD) three minutes into the process after “starting windows” it shows STOP: 0x0000007B. The problem is that the XP install cannot see the hard disc drive as it is not compatible with the AHCI hardware in the Intel M65 mobile Sandy Bridge chipset.

Get the driver from here unpack it with winrar then follow the instructions here to slip stream it onto an XP Pro install CD -sp3 recommended.

Boot from your new CD and perform a normal XP install, about 15 minutes later the laptop will reboot into XP for the first time (the 2nd stage of the install).

Time to install the Intel Chipset sp52145, restart and the .net Framework (needed for some of the installs below)

The often sought Other devices – Unknown device shown in device manager needs the Hp 3D Driveguard sp51726 -this is the driver for an accelerometer which (allegedly) saves data loss during impact -the laptop’s equivalent of an Airbag!

After all of the above going to Control Panel / Performance and Maintenance / System / Hardware / Device Manager (shortcut keys:- fn + Win Key + break) should look like this with no yellow exclamation marks:-

There is now just one more thing to do as the volume and brightness function keys do not work, all resolved by Hp Hotkey Support sp53796.

There are many more drivers on the Hp.com support site for XP on this laptop, those listed above are the essential ones. Others relate to drive encryption for example, useful perhaps but anything that involves encrypting / decrypting data to / from the hard drive will have an overhead and is likely to slow things a little.

Next delete the c:\swsetup folder and do a defrag. This little beauty then flys, going from the end of the Bios screen to desktop in 20 seconds (7400rpm drive, no AV or tweaks) , wow, enjoy ! -Terry

How to tell if it’s an XP Sp3 disc: look in the disc root directory, there will be a file named WIN51IP.SP3. 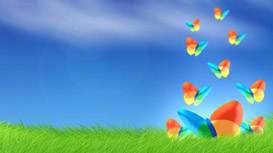 Finally, set it off with a nice wallpaper based on the familiar xp “bliss” theme. Click the image to the left then right-click that (an image set at exactly 1366 x 768 pixels) and select Set as Background.